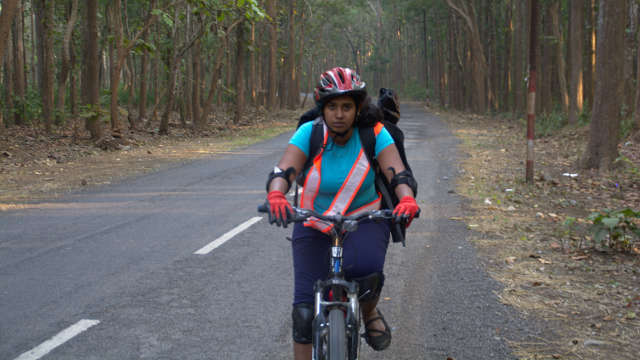 I love bicycling and have been doing it since learning it during my summer vacation between fourth standard and fifth standard. After marriage, I have been encouraging Priya (my wife) to use her bicycle frequently as well. But what she achieved over the last two weekends has left me immensely proud of her. With me, Priya rode 235km in the rainy conditions of monsoon, one of them being a 160km (or 100 mile) long ride from Pune to Thane. All this, considering that this is Priya’s first year of serious long distance bicycling, whereas it is already my 6th.

What is Priya’s secret to such supreme fitness and determination? Ideally this should have been Priya’s post to write as her own story, but this time we decided to take a different angle, by making me the observer who studied Priya’s success.

Here are some traits that set up Priya for success in her long distance bicycling.

Starting tennis as a hobby for ‘fitness’, getting a job in Information Technology because ‘that’s where the money is’ and learning Hindustani and Carnatic music to ‘stay in touch with culture’. These are well-intentioned, practical and noble reasons put forth for various pursuits. However, these reasons alone may never be enough to sustain a habit as a cog in one’s lifestyle. To be able to aim and achieve high, the single reason for why we do stuff has to be, ‘Because I simply LOOOVE doing it’. Perhaps this is the difference between a loved hobby & simply a pursuit. There will always be periods in any activity that will test you to the maximum and those are periods when you feel like quitting. Genuine interest in that activity is the only thing that will keep you going. During our ride, Priya had to ride in extremely rainy conditions with the rain slapping across her face. She started suffering sore back and thighs. With each pedal, her energy and enthusiasm were flagging. But she just would not give up, because she LOVES bicycling. She just wanted to complete those 100 miles badly. Her passion overcame everything else. The weather conditions meant that it took her 10 and a half hours to complete those miles, but complete she did!

There are talented people and there are those who simple refuse to quit. They may have comparitively less natural talent, but somehow get through and win a lot. One such notable comparison is that of Rafael Nadal and Roger Federer. Federer is magnificently talented and has more grand slam trophies than anyone else to date. But whenever he retires, he will do so with an inferior head-to-head record against Nadal, whose game looks almost ungainly and is more brute-force than flow. However, Nadal chases down every shot and makes sure he puts the ball into the opponent’s court one more time and forces him to play one more shot. That was too much for Federer, who isn’t the best shot chaser in tennis. Nadal has won significantly more games in their head-to-head on all different kinds of surfaces (23 out of their 34 games against each other). What’s more, Nadal has won an olympic gold in individual tennis, which Federer hasn’t. Federer is the indisputable king of tennis overall, but when it comes to who the king is when the two face off each other, the odds tilt heavily in favour of the untiring Nadal.

Priya showed similar character in her bicycle rides. Despite all the pain barrier, every water logged stretch of road, every pothole, every pound to her face by the heavy rain, every shiver due to the wet and cold conditions seemed to make her stronger as she continued to hammer the pedals every second.

In Priya’s own words, “At times, I did feel like giving up and pushing my bicycle into the luggage compartment of the next local train and heading home. But then, I am a Finisher. I will not give up just because the conditions are harsh. I will slug it till the finish line”. And true to her word, she never gave up. In fact, you can never win anything until you first reach completion. As they say, “To finish first, you must first finish!”

Winners don’t just ‘train’, they make it a lifestyle

This happens every year. The Mumbai marathon happens in January. Enthusiasts sign up around July / August of the previous year. Then there is a long period of non-activity. Finally, when the newspapers and media start the hype and the countdown to the marathon from 100 days prior to it, people suddenly realise that they ‘better start training’. Depending on their discipline, they may put in between 20 to 100 days of actual training.

The interesting thing is that once the marathon is done, there is no running, not even talk about it. Once the gala is over, lots of people, who were running hard just weeks ago, go back to their sedentary lives. They do not fall in love with running as a sport to be enjoyed throughout the year.

Then there are the winners of the event. Those who train all year round. But, more important than their actual ‘training’ sessions is how they convert small opportunities into ‘training’ sessions. Need to get toothpaste from the convenience shop? They run down the stairs, jog to the convenience store and run their way back up the stairs. 10-minute mini-training done, even though it isn’t on a jogging track or in running shoes. They do not train for running. They live for running! They have made running a lifestyle. Those small sessions add up and clock in more hours. By the rule of 10,000 hours (as described by Anders Ericsson in the book Peak), they are already much better than the others are during the marathon.

So it is for Priya. Many people take their bicycles out for the occasional weekend ride in nice locales like a forest trail or the city park, wearing a dry-fit spandex and a sports head-band, both of which are probably unused for the rest of the week. Of course, we have seen many who drive their cars to the gym before using the stationary bike for a 10-minute workout!! In contrast, Priya lugs her laptop bag, wears work clothes, i.e. kurti and leggings, ties her hair into a plait and rides to work on her bicycle. Probably, the most unappealing and unsexiest of rides, generally through dusty and noisy city roads and traffic, and currently through rain-soaked filthy roads, but Priya LOVES bicycle riding and has turned it into a lifestyle.

While not always for endorsement reasons, top performers are always partial to certain brands for performance reasons. Badminton players swear by Yonex, businessmen have pledged allegiance to the Nokia 6600, then Blackberry, and now the iPhone for productivity and audiophiles perk their ears up when they listen to music over BOSE speakers. Priya and I have seen significant changes in our Internet experience after investing in a 15Mbps optic fibre Internet connection. And we all use cellphone cameras for a quick snap while National Geographic photographers use cameras and accessories worth hundreds of thousands of Rupees.

To the untrained and uninitiated, all the tools look alike. But once someone has spent time using each of them, the differences are significant and as expertise grows, preference to higher quality grows.

Priya had an ordinary Maxit MTB before our first weekend ride of 75km. However for that ride, she switched to my hybrid bicycle (Montra Blues), much more suited for road rides. It made a world of difference to her ride and she decided to upgrade to her own Montra Blues for our 160km ride. The Montra worked wonderfully in rainy conditions on flat, uphill and downhill roads and proved be to be much superior to the ordinary MTB. That said, it would have been ambitious to use the Montra for a 100 metre sprint race. Montra is good for highway cruises and a track racing bicycle is the one for track races.

Priya has used such judgement in the past by investing in professional running shoes for her 4 half marathons, trekking shoes for snow trekking and good quality jackets, woollen-wear and thermals. Good equipment has freed her up from many hassles and enhanced her experience.

So there it is. It should come as no surprise that Priya aced through a 75-km ride (her first 50+ km ride) and immediately followed it up next weekend with a 160-km ride (her first 100+ km). She has the genuine interest, is highly determined, follows bicycling as a lifestyle and has invested in the right equipment which fits what she wants out of her bicycling.

What kind of extra-ordinary successes have you had in your own life? How did you achieve it? What activity brings the maximum out of you? How has choice of equipment determined the outcome? Please share with me in the comments section.