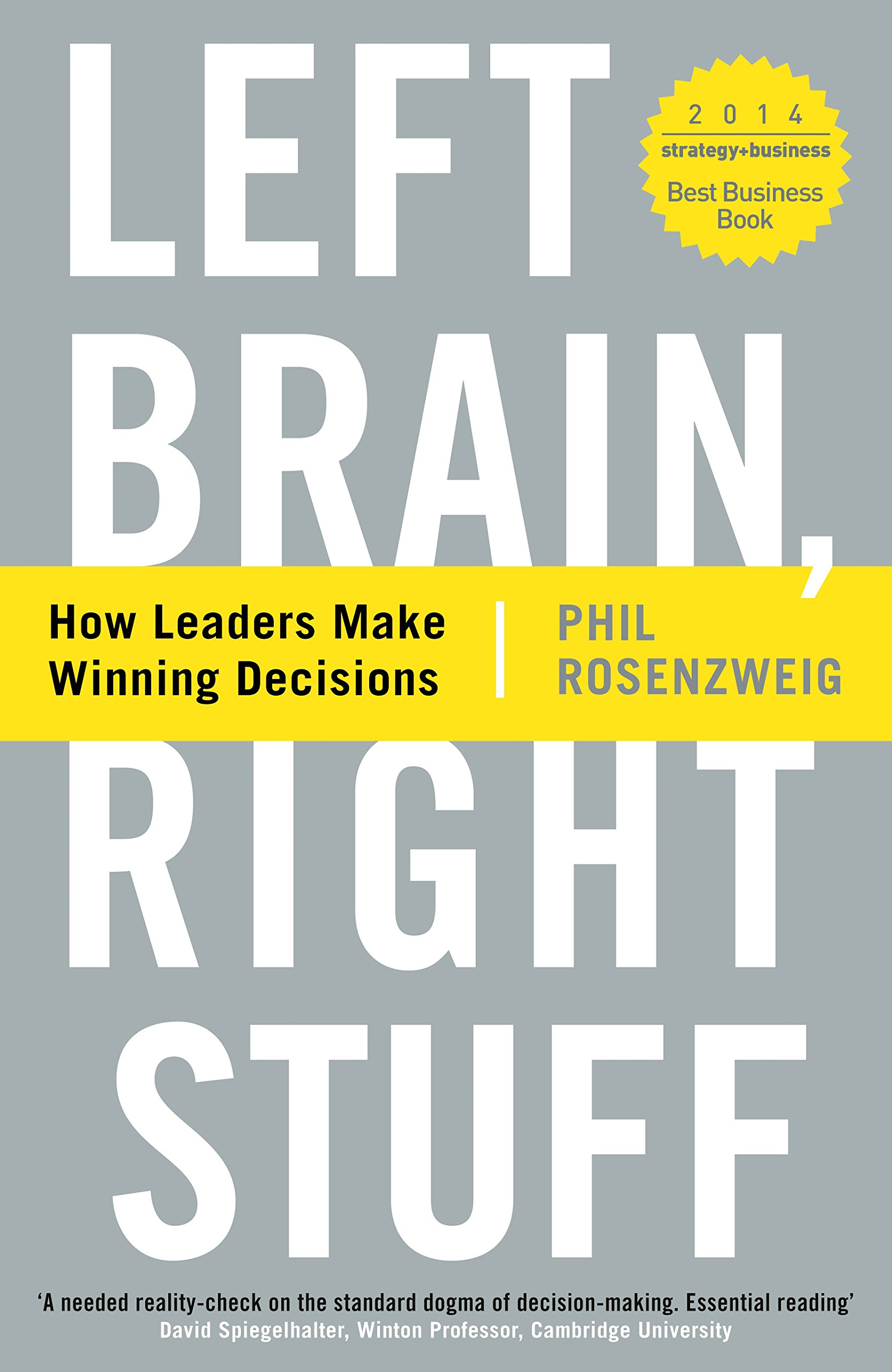 Swiss author Phil Rosenzweig talks about two modes in which our brain operates: deliberation and implementation. The process of deliberation is for carefully considering options and their outcomes. Pros and cons are weighed, the best and worst outcomes are sized up and a decision is made. With a decision made, the process of implementation is when you stop deliberating, focus on the tasks and get them done. Rosenzweig offers that the two modes are divided into the two sides of the brain: left and right.

The functions of the left side of the brain are as follows.

When all is said and done, it is the function of the right brain to take charge and get things done. For that purpose, the right-brain controls the following faculties.

Why understand the brain

The book helps us understand how our brain works so that we can be aware and improve our decision-making abilities.

Here are some things that we need to understand in the process of decision-making.

What is in control and what is not

To be able to give your best to a situation, you must be fully confident in what you can control. If something feels out of your control, then you will not be fully committed. E.g. while writing a blog post, it is you who can control that it can be done by the weekend, so that it is ready to be taken live.

But at the same time, You must let go of what you cannot control, otherwise you will be frustrated when the outcome doesn’t go your way. You cannot control how many people read, like or share your blog post. It depends on factors out of your control, such as the algorithm of the social network where you share your post, intentions of other people and the popularity of the content of the post.

Control: Direct, none and indirect

Based on the situation, the control you can exert may be none, direct or indirect. E.g. when you apply for a loan, the only thing you have DIRECT control on is to fill up the application and make sure that the relevant documents are attached and valid. You have ABSOLUTELY NO control on whether the bank will indeed approve your loan. But, the chances of the bank sanctioning depends on some things you can directly control. E.g. if you have been paying past loans and credit card dues diligently and promptly, then your credit rating goes up. You have INDIRECT control over whether the bank will consider your loan application more seriously than if your credit rating were bad.

The effects of rewards

Your decision-making alters drastically based on the difference between the rewards for the winners and the losers. This difference is called the payoff skew. Rosenzweig talks about three types of reward distributions or payoff skews.

Low skew: is when the difference in rewards among the winners is not highly skewed. In Europe’s top football leagues, the teams who finish within the top four make it to the continent’s elite event called the UEFA Champions League. Some teams visibly slack off as soon as they have reached the top four. They no longer try to win with huge margins and are sometimes happy to play out 0-0 or 1-1 draws simply to consolidate their position in the leader board. They stop taking risks and would rather not lose games. With a place assured in the next season’s continental top event, they care less about winning the trophy within their own country’s league. A low skew reward system punishes the losers less, so those already in winning positions start to play safe so that they consolidate their places. They do not care about reaching the top.

High skew: Contrast that with events where knockouts happen or medals are given. The difference is between in positions can mean winning gold or staying content with silver. As the skew between rewards increases, people get more competitive.

Winner takes all: Finally we have a winner-takes-all system, where ONLY the first-place party gets all the glory. Everyone else returns empty-handed. This is the highest form of reward skew. In the afore-mentioned elite European event, UEFA Champions League, ONLY the winning team gets to stand on the podium and raise the trophy in their hands amidst celebration. The losing finalist team members have to return to their locker room. The winning team is automatically guaranteed a place in the next season’s event, even if they don’t finish within the top four in their own country, but no such exceptions are made for the losing finalist. This is a situation where only the winner is considered. This causes fierce competition where the participants pull out all stops and go for the kill.

Rosenzweig argues that the word ‘overconfidence’ is a meaningless word. It is ONLY used in hindsight and never as a predictor or in the present. The same decision, when it leads to different outcomes, can be attributed to ‘overconfidence’ in case of failure, but ‘extreme courage’ in case of success. Instead of overconfidence, the author suggests the following errors in judgement.

How reliable are base rates?

A ‘base rate’ is a known / believed probability about the likelihood of the outcomes of an event. E.g., if you toss a coin, the base rate of the coin landing heads is 50%. Likewise for tails. A coin has only two sides. There is no way to botch up the probabilities or estimate incorrectly.

But events in life are not so simple. Instead of just two sides to the coin of life, there are several factors that influence outcomes. One outcome may be more likely than another if some conditions are changed. Also, the base rates for your own experience might be different from that of the entire system. E.g. you may always land up with rude Uber drivers even though the base rate of getting rude drivers in the entire Uber system might be just 7%.

The misunderstanding of base rates is what causes overprecision, overestimation and overplacement. There is no good solution for it. For some events, base rates might be readily available online or with authorities. E.g. out of 100 patients admitted for colon cancer, how many survive. But for most events, base rates are unknown or unpublished. E.g. out of 100 people who buy the physical copy of a book that helps improve your fitness, how many actually finish reading it and how many take action as suggested in the book?

Also, base rates change over time. So the data published may be outdated. 34% of the software programs written in 2016 were in Python language. But Javascript introduced radically new features in the last three years. On the other hand, Python has been heavily adopted by the finance sector for automatic trading algorithms. The new base rates on preferred programming languages are totally different from those of 2016.

The limitations of deliberate practice

Deliberate practice refers to practising the same thing again and again, measuring the results, improving and repeating the process. It is believed to improve your decision-making over time. However there are limitations. For deliberate practice to work, here are some conditions.

The effectiveness of models

There are several mathematical and mental models to help predict where an event will go. Stock market is rife with such models. A humungous amount of calculated indicators are used to predict the direction of the market.

Models are good when you want to predict the outcome of an event that is not in your direct control. E.g. where the market will move based on its indicators or how good a football team will do based on the players chosen in their lineup. But they are meaningless when you are the person who has to take action next. You cannot think about ‘rates of success’ or ‘likelihood of failure’ when you are the doctor on the operating table, nor can you do it when a startup company with no track record is approaching you for investment. You just HAVE TO muster the confidence in your success.

Sometimes, a large company outbids other large competitors to take over a lucrative business. They do so by paying a humongous sum of money in the process to stay ahead of competition. But soon, all that lost money comes back to bite the company and they soon lose their way and go bankrupt.

In tennis, too often, two players slog it out in a five-setter semi-final and run themselves ragged. The winner, even though he/she wins the semi-final, usually is thrashed in the final by a fresher opponent. Sometimes players pick up injuries that derail their entire season.

This is called the winner’s curse. Sometimes winning takes its toll. You need to know the right time to back away and walk out of fierce competition. Instead of getting caught up in the heat, it may be necessary to walk away or at least slow down, let the opponent get an advantage and then strike back when you have the opportunity.

The anatomy of a good decision

Summing up everything, Rosenzweig suggests the following questions before you arrive at a decision.

The author likens the process of decision making to the roles of :

Decision making is complex process. You can never be 100% correct. But by slowing down and thinking about decision making can help you arrive at good solutions.